After teaching yesterday and then spending the night at school supervising the antics of my graduating Year 12 students, I have entered my 29th consecutive hour of being at work and awake.

I just spent two minutes wondering why I couldn’t correct a randomly occurring capital letter in an email I had already sent.

I have also just realised that there is no way to scull a Barista Bros Iced Coffee in front of 20 Year 9/10 students without looking needy.  Upon this epiphany, I reverted to sipping it in a casual coffee-house-with-minimalist-art-on-the-walls kind of way.

I need to go home.

While perusing the Book of Face this morning, I saw a photo of a beautiful horse that has been turned into the closest thing  to a real-life rainbow unicorn that you’re ever going to see. It’s magnificent! 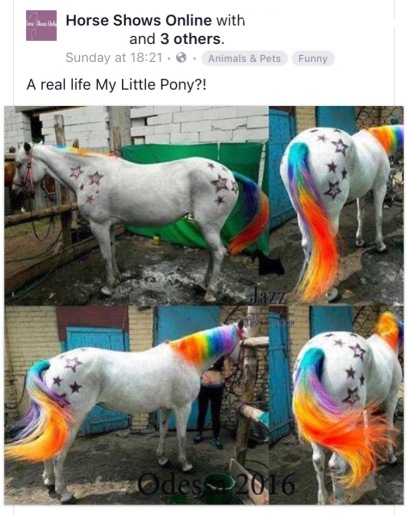 “Hey!” I said to my office buddy, who is always cheerful, positive and full of energy, “I found your spirit animal!”

I showed her the picture and explained,  “I’m sure your spirit animal is a rainbow unicorn!”

She laughed and then asked, “What do you think yours is?”

“Probably a pissed-off squirrel,” I answered.

Then we laughed, because we both knew I was right.

Today I was talking with LMC about why it is good to learn French, and where people speak French around the world. I told her that she would need to speak French if she wanted to go to Canada.

“Can we just not go to Gettysburg?” she asked.

“Gettysburg isn’t in Canada!” I said.

“No. It’s in America. It’s where there was a really decisive battle in the American Civil War, and where Abraham Lincoln delivered an important speech called the Gettysburg address.”

“Abraham Lincoln. Wasn’t he the guy on a coin?”

“Yeah, and if you’re under a bridge and it falls down on you, it’s good luck.”

“Dude, if you’re under a bridge and it falls on you, it’s not good luck.”

“The coin with Abraham Lincoln on it.”

We had a family afternoon today. Because it’s a school night, I had sent LMC for a shower so that she could wash her hair. Sitting around the table after dinner, LMC was playing with the dragonfly pendant hanging on the chain around her neck.

LMC’s mother said to her, “Make sure you change your necklace before school tomorrow.”

We laughed hard, and LMC just looked at us oddly.

“Ooooohhhhhhhh!” she said. Then she laughed, too.

Some months ago, I was driving in town with LMC in the car.

We passed a big blue house that I pass every day on my way to work.

“That’s where the bear lives,” I said.

This surprised me, as she watches a fair bit of TV and I thought she’d get the joke.

“You know… the bear in the big blue house? Like the TV show?”

“Never heard of it,” she said.

Typical. All was silent in the car except for the sad sound of a great joke falling over and dying.
I didn’t think any more of it. In fact, I had entirely forgotten about it until last Sunday when we were all having dinner together.

“Hey,” she said, “I told my friends about the big blue house in Warrnambool, and they didn’t even know that’s where it was. They thought it was in America somewhere.”

“You know… that TV show. You showed me the house…”

Trying not to laugh, I looked at her and said, “You do realise I was joking? It’s just A big blue house… not THE Big Blue House.”

“But I told my friends! And they wanted autographs.”

“Which you were going to ask me to call in and ask for?”

“Well… yeah.”
This kid never misses an opportunity. I’m just lucky it ends in laughter most of the time.

Tonight, in a family Trivial Pursuit game, my brother asked: ‘What tool did astronomer Roger Thompson say is “fundamentally altering our view of the universe’?”

My brother: “Correct. AND the Hubble Telescope.”

My husband is spending today door-knocking and collecting in  for Red Cross.

We met at the bakery for lunch, where he asked the baker for a donation.

A lady turned to him and asked what he was doing.

“He’s walking the streets to make money,” I said.

Everyone laughed, so I added, “… bet he would have made more if he’d borrowed my fishnets.”

This morning, my man made bacon, eggs and grilled tomatoes for an Easter Sunday breakfast.

One of our guests dropped a little on her white skirt and commented that it was going to be hard to get the mark out.

“Make-up wipes will get it out,” I said helpfully.

Just as she was putting more food in her mouth, I leaned over to my husband and whispered quite loudly, “She said I’ve got great tits!”

Just as I had hoped,  my friend nearly spat her food out again as she laughed.

And then, as diplomatic as ever, my husband said,”I don’t think that’s what she said.”

“As if she didn’t,” I said, indicating the general area, “Check ’em out!”
And then nobody knew what to say.

So, I forgot to tell the funniest part of last night’s fart story.

After she finished laughing, she asked me, “Is that all you’ve got? Or is there something else up your sleeve?”

As a woman, I’m led to believe that I’m one of very few who think that farts are actually funny. I try to maintain decorum most of the time, but on the odd occasion, I can compete with the best of them.

I’m generally quite private about m such things but, when you’re holidaying in a caravan and in closer quarters than usual, such discretion is not always so achievable.

So tonight, LMC heard me let a fart go for only the second time ever.

She thought it was hysterical. Honestly, it was really nothing special, but she cracked up laughing until she had tears and her stomach hurt. 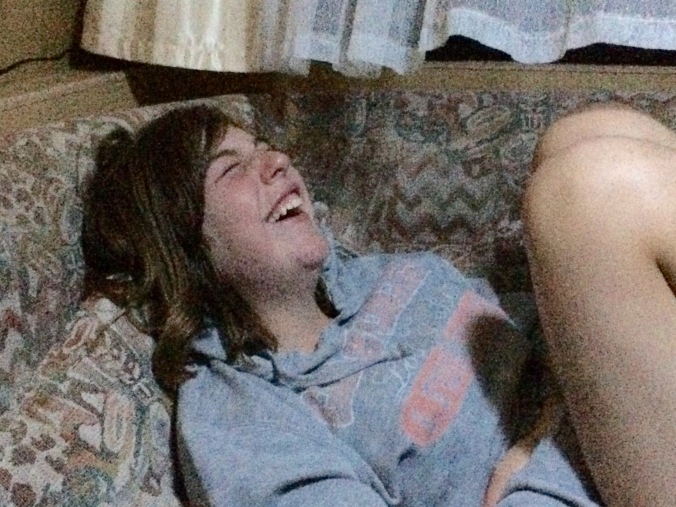 It’s good to know she’s so easily and cheaply entertained. We can sell the TV.