Jerilderie is a small country town situated on Billabong Creek in the southern Riverina area of New South Wales. The Newell Highway runs right through the town, so it is very easy to find.

Jerilderie has a lovely lake and park on the banks of Billabong Creek. This park is also the site of the town’s war memorial to local soldiers  who fought in the Boer War both World Wars.

It’s a small town with a big history, courtesy of Australian bushranger Ned Kelly and his gang. It was an even smaller town then than it is now, but it had one thing that was most attractive to Ned Kelly: a printing press.

Although the Kelly gang usually operated in northern Victoria, it was in Jerilderie where Ned and his gang robbed the bank, took control of the local post and telegraph office, bailed up the postmaster and had telegraph wires cut and the poles cut down to prevent news of his visit to the town being communicated until after the fact.

It was in Jerilderie that Ned Kelly entrusted his 75 000 word manifesto known as The Jerilderie Letter to the postmaster, who promised to pass the papers on to the newspaper editor. This document explained and defended Kelly’s motives and actions, and also proposed a republic of north-eastern Victoria. The postmaster did not pass on the papers— in fact, the originals were lost for 90 years, and a copy of the letter was not printed until fifty years after Kelly’s death.

Visitors to Jerilderie can see the buildings visited by Kelly and his gang, and follow a trail of story boards that detail the events of the gang’s exploits in town. There is also a small museum attached to the Murrumbidgee Shire offices, which has displays of artefacts including Kelly’s Colt Carbine revolver and replicas of the iconic armour worn by the gang.

Jerilderie is a great place to visit. The locals are friendly and welcoming, and visitors can find excellent food at both the local bakery and the pub. The  old-fashioned candy store is also worth visiting for those with a sweet tooth.

Altina Wildlife Park is one of the hidden gems of New South Wales’ Riverina district. Situated just over 30km from Griffith and just under 100kn from Jerilderie, Altina is on the Sturt Highway near Darlington Point.

Altina has a great range of small and large animals, and offers a positive and enjoyable opportunities to see and learn about them.

Visitors are invited to walk through the small animal and reptile sections of the park at their leisure, and are then taken through the  large animal part of the park on a wagon behind one of the park’s beautiful Clydesdale horses.

There is a great range of animals from all over the world to see, and the tours are informative and interesting. The tours are presented by the zookeepers, who are knowledgeable about all the animals both in a general sense and in terms of being personally involved in the care, training and feeding of the animals.

The enclosures are large enough for the animals to have sufficient room to roam, and care is taken to provide, is keen to preserve and breed animals that may be endangered in the wild. The park has a philosophy of interfering with the animals as little as possible, so the animals are trained to do certain things so that the keepers can check their health without going into their enclosures or sedating the animals any more than is absolutely necessary.

I have visited Altina twice when visiting family in Griffith, and have thoroughly enjoyed both experiences.

Point Danger is on a promontory just south of Portland, Victoria.

Just off the coast is an island that hosts a gannet rookery. It’s not accessible to the public, but you can go down to the coastline and watch them flying just beyond the fence.

The shore itself is fenced off so that the birds remain undisturbed by visitors. There are better places from which to take photos of the birds and the island, but I wasn’t able to access them on this visit because of mobility issues: I’m on crutches! 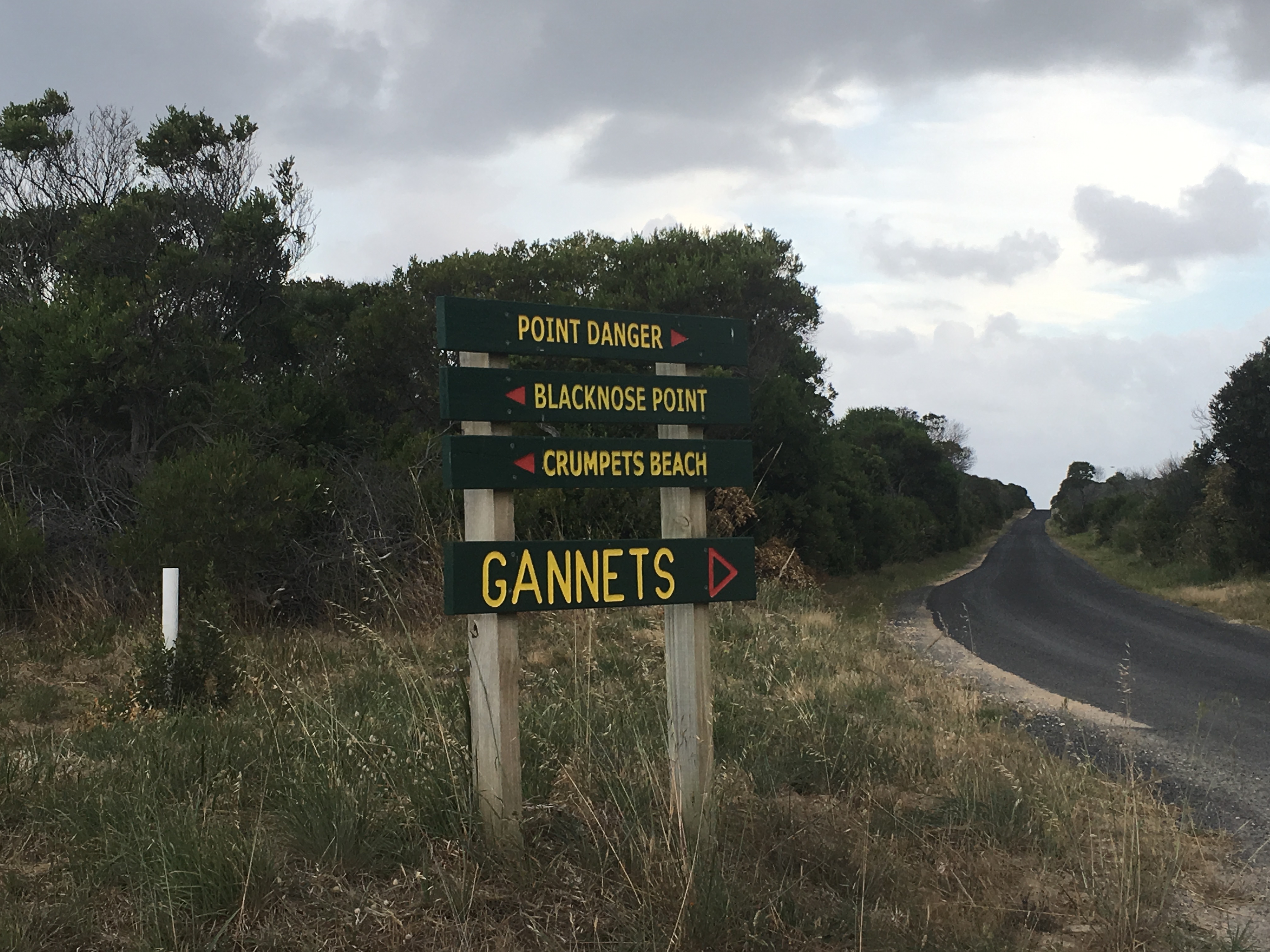 You can also turn off the road to the rookery to visit Crumpets Beach. This is a beautiful spot that lies almost at the end of a fairly rugged track that you would only attempt in a 4-wheel-drive or on foot.

Once the track has negotiated some tight bends and bumpy stretches, all the while going fairly steeply downhill, it levels out to run along the beach toward the headland.

This magnificent scenery  all lies within fifteen minutes’ drive of Portland, on the south-west coast of Victoria, Australia, which is actually one of the oldest cities in the state. It has some lovely old buildings, a very active deep-harbour international sea port, and is very popular with fishermen and holidaymakers.

Echuca sits on the Murray River which forms the natural border between Victoria and New South Wales. In its heyday, it was the busiest port in Australia, shipping wool, cotton, timber, wheat and supplies all over the inland regions of three states, until rail took over as the main form of transporting goods because it was faster and more flexible in terms of routes and destinations.

Now, a visit to the Port of Echuca is generally for the purposes of tourism and recreation.

The river has been known to flood to quite epic heights in the past. The markers on these trees give some indication. 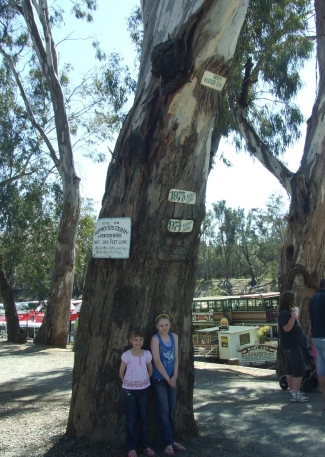 The Clydesdales are always a highlight for me. I love these gentle giants, and they’re so photogenic! 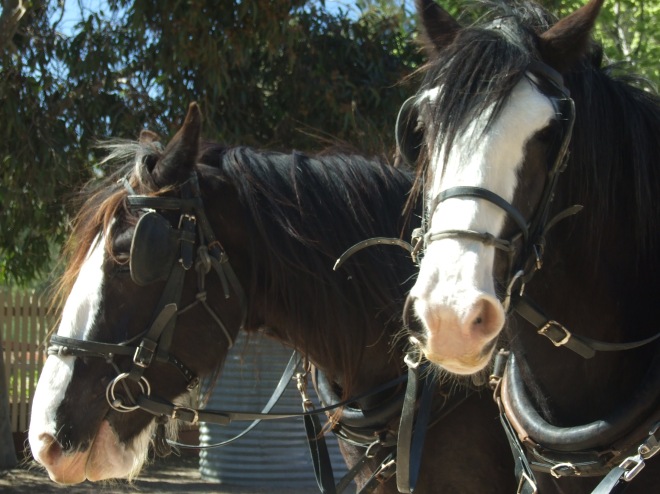 Houseboat holidays are enormously popular here. It’s a great way to explore the river and leave the rest of the world behind. 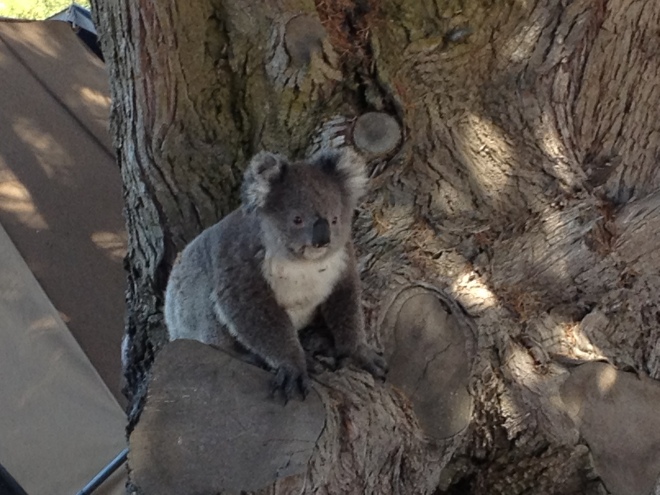