Point Danger is on a promontory just south of Portland, Victoria.

Just off the coast is an island that hosts a gannet rookery. It’s not accessible to the public, but you can go down to the coastline and watch them flying just beyond the fence.

The shore itself is fenced off so that the birds remain undisturbed by visitors. There are better places from which to take photos of the birds and the island, but I wasn’t able to access them on this visit because of mobility issues: I’m on crutches!

You can also turn off the road to the rookery to visit Crumpets Beach. This is a beautiful spot that lies almost at the end of a fairly rugged track that you would only attempt in a 4-wheel-drive or on foot.

Once the track has negotiated some tight bends and bumpy stretches, all the while going fairly steeply downhill, it levels out to run along the beach toward the headland.

This magnificent scenery  all lies within fifteen minutes’ drive of Portland, on the south-west coast of Victoria, Australia, which is actually one of the oldest cities in the state. It has some lovely old buildings, a very active deep-harbour international sea port, and is very popular with fishermen and holidaymakers.

I don’t know about you, but I love a stormy sky and the different qualities it brings to the landscape.

Mt Leura is relatively small for a ‘mountain’, but it does afford a spectacular view of the “lakes and craters” landscape of this dormant volcanic region.

Looking north – the rain is coming! 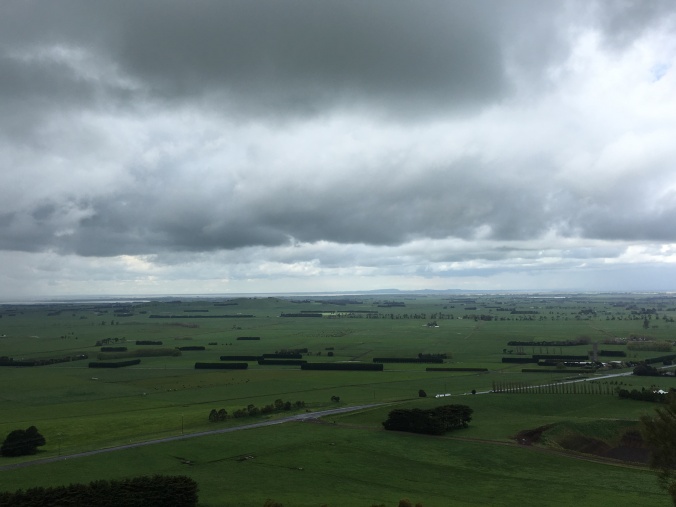 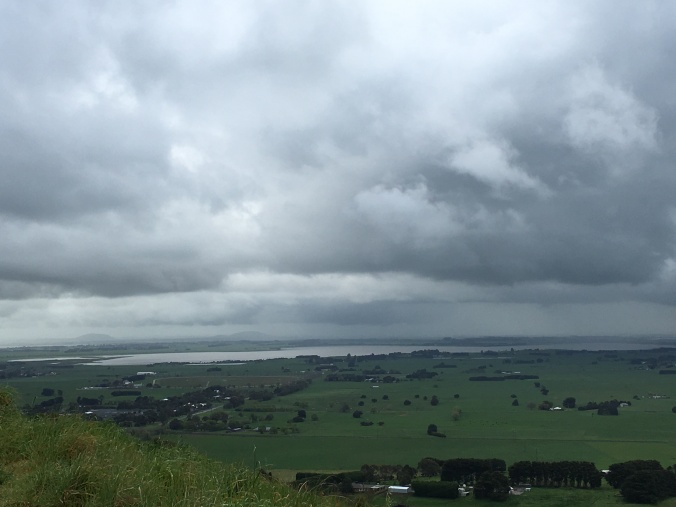 This is one of my favourite spots on the river for thinking, writing, or enjoying a cup of coffee before work.

A good morning for reflection!

Pelicans often enjoy the protection of this quiet stretch of the river.

The river meanders down to the coast where it meets the Southern Ocean at Logan’s Beach.

Near the river mouth and shore, the Hopkins has a wide beach of its own. 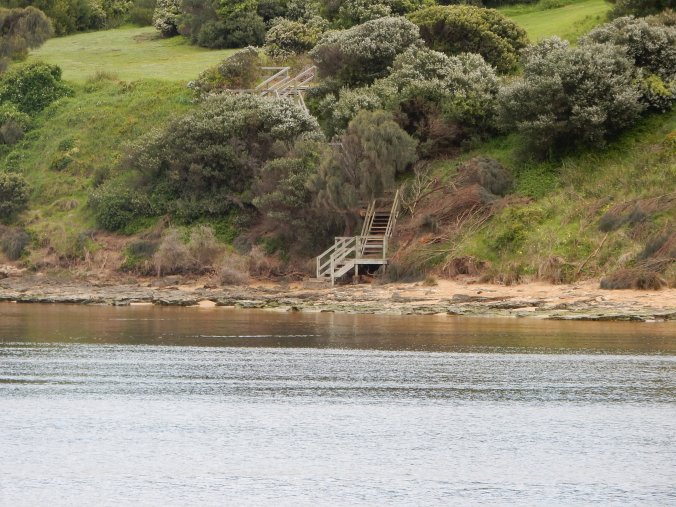 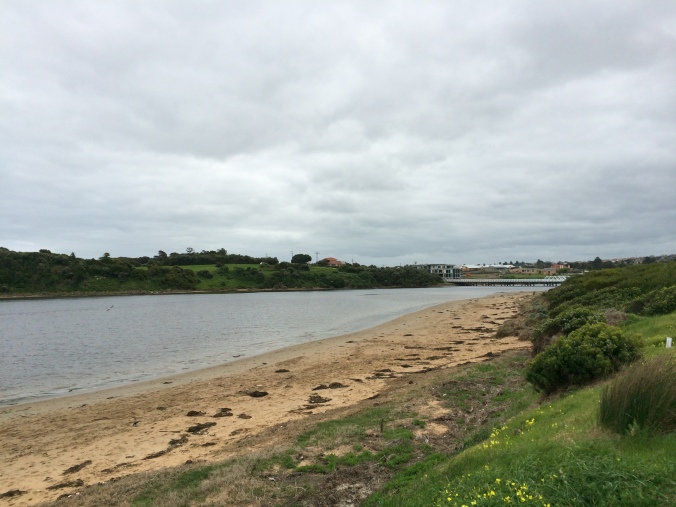 I love places that challenge the popular stereotypes that many people hold about Australia – the beach, the desert, the Sydney Opera House and Harbour Bridge, and Uluru.

Weeaproinah is one of the wettest places in the state of Victoria. Although it’s very close to the coast, this locality at the end of the Otway Ranges boasts magnificent mountain ash rainforest that contrasts lush green foliage with tall, straight tree trunks. Birds and wildlife abound.

The Otway Fly is a treetop walk and/or zipline adventure through the forest, taking advantage of different levels and heights, and allowing visitors to experience different aspects of the Australian bush.

Red Rock is a dormant volcano near Alvie in western Victoria which offers spectacular views of lakes, craters and dramatic landforms that are the result of volcanic action over thousands of years. It is believed to be a younger volcano than others nearby such as Tower Hill near Warrnambool, Lake Purrumbete near Camperdown, and Mt Elephant at Derrinallum. The views from the lookout are breathtaking: craters, lakes, hills and folds that rise dramatically out of the earth, and a patchwork of farms that thrive on the rich volcanic soil.It’s no wonder they call this “Lakes and Craters Country”. 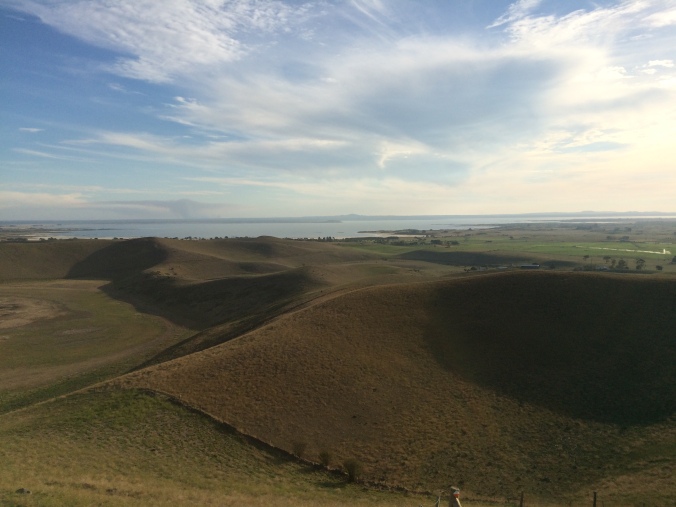 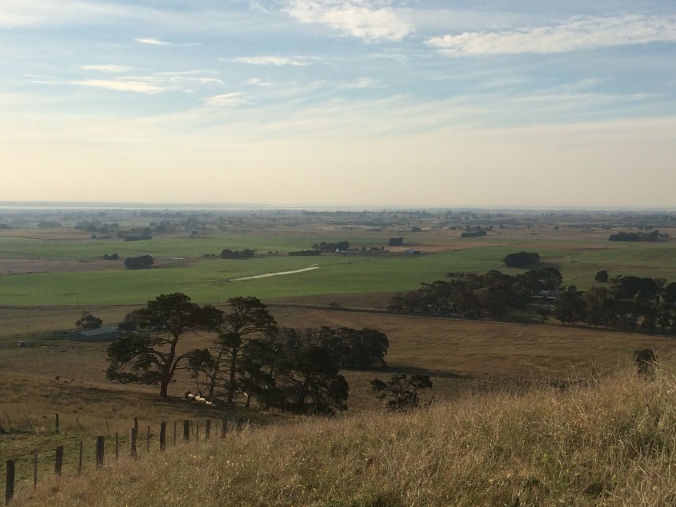 On Coragulac Hill near the peak of Red Rock, is the War Memorial for Alvie and Dreeite servicemen who fought “for God, King and Country” as stated on the stone memorial. As I stood and read the names, I was very aware of the fact that it was exactly 100 years ago that some of these men were fighting and dying for our freedom.  I spent two minutes in silence and finished with “Lest We Forget”.  It just seemed like the right thing to do.

A path along the foreshore and up to the rotunda contains bricks engraved with dedications and messages from local people. This was definitely my favourite. 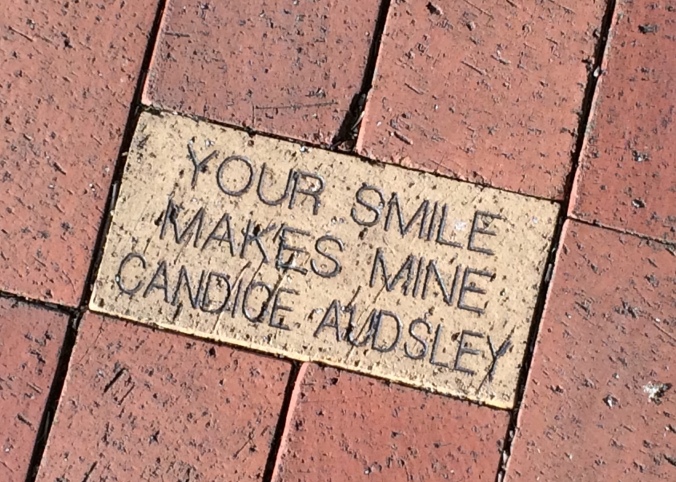 The artwork is in the shape the footpad of the Tachyglossus, a now-extinct relative of the echidna. It includes totems of the local Gulidjan/Kolacgnat tribe as well as a boomerang, a gum tree leaf and an outline of Red Rock, a dormant volcano visible on the other side of the lake. It is surrounded by native grasses and plants, and a stone wall that represents British settlement.

In the early Autumn, the Hopkins River meanders lazily through the beautiful farmlands of western Victoria, gurgling and spilling gently over these rocks and falls near Cudgee, just north of Warrnambool. The water level is so low that some parts of the stream are cut off, forming rock pools in the river bed above the falls. Cows graze along the banks and drink from the cool, fresh stream.
When the river is high and fast, the falls are turbulent and powerful, and the stream below is far too deep and unsafe for cows to graze so close to its banks. 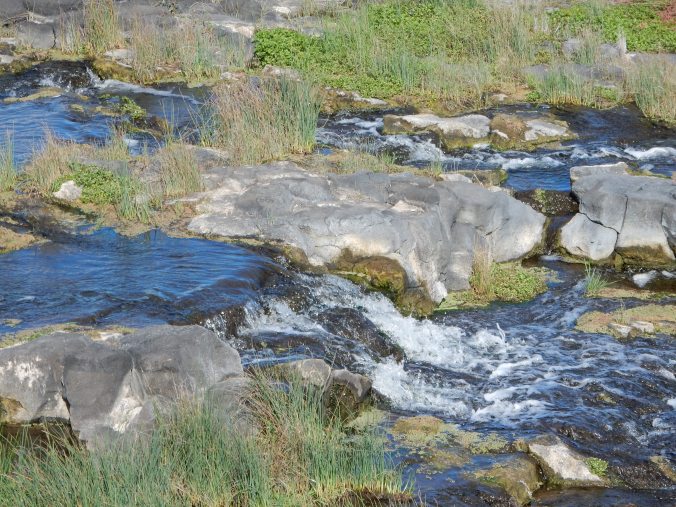 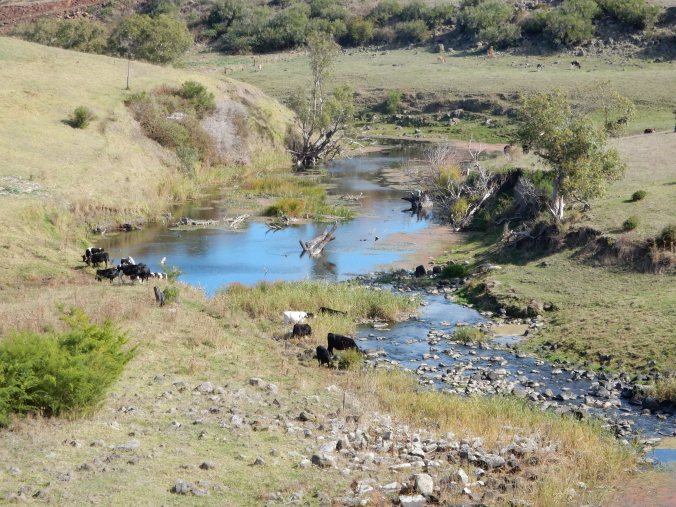 The Stony Rises are found between Camperdown, Pirron Yallock and Cobden in Victoria’s Western District.
The fields are full of volcanic rock, a testament to the fact that the dormant volcanoes in the area were once far more active than they are now.  Ever since settlement, local farmers have used these rocks to create stone walls that divide their farms into paddocks. While some have fallen into disrepair, others are still maintained and used today. 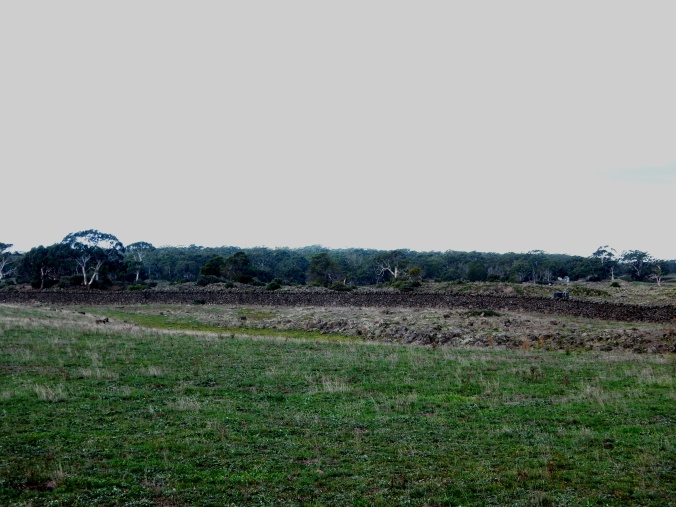 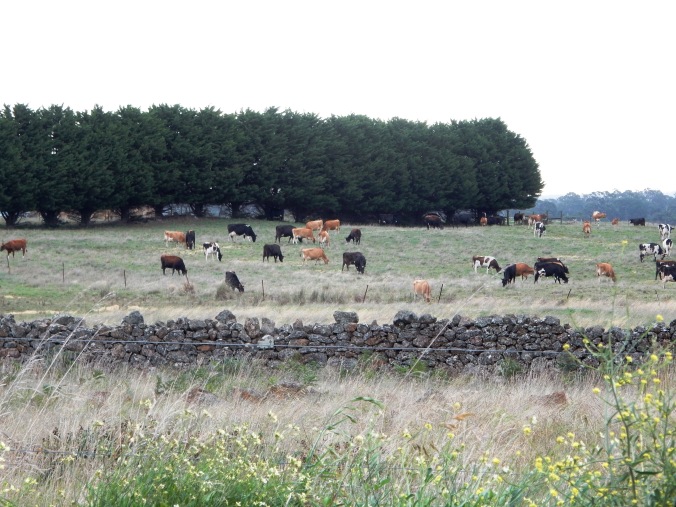 Lake Purrumbete is one of the volcanic crater lakes near Camperdown and Cobden in the Western District of Victoria. It is well known among those who love to fish, but many other people have never heard of it. 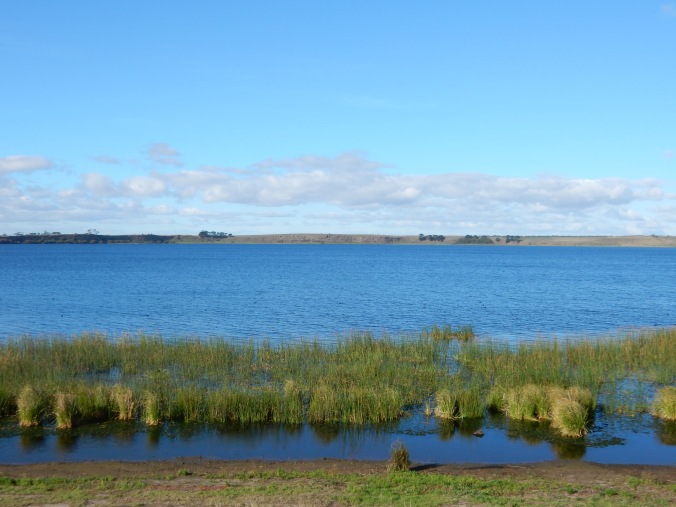 Moorhens are common in western Victoria, nesting on the edges of lakes and farm damns. 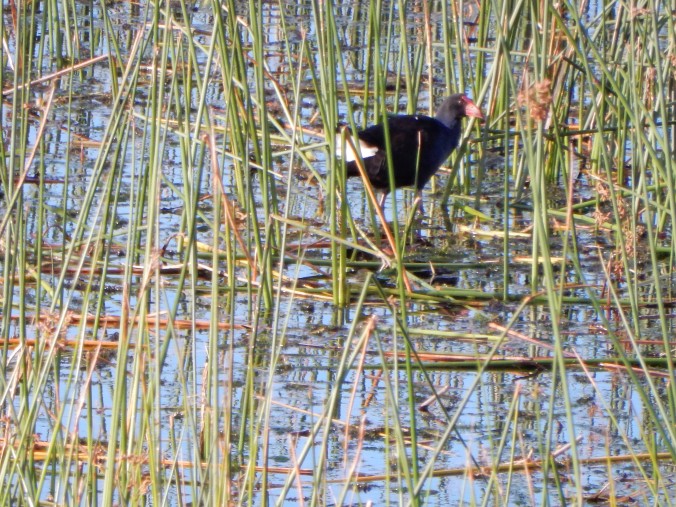 The Lake Edge Cafe is on the western shore of the lake. It offers lunches and a range of delicious home-made cakes, tea and coffee, cool drinks, and is licenced to serve wine and beer. There’s plenty of parking, and whether you sit inside or out on the deck, you get a great view of the beautiful lake and surrounding scenery. 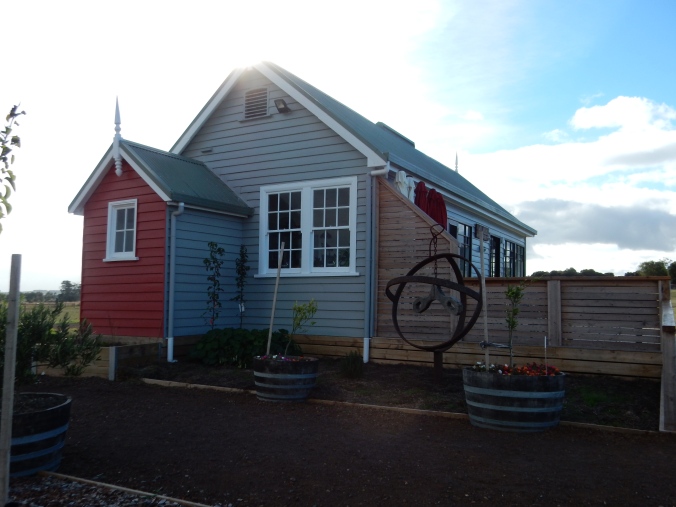 Lofty mountain ash and other gum trees in the old-growth forest with tree ferns lining the edge of the road.

Younger trees pushing the boundaries of the car park at Melba Gully.

A view through a forestry/logging area deeper into the Otway Ranges.

Kangaroos enjoying a feed on fresh green grass in a clearing on the road into a logging area.